Mindfulness can be an effective way to alleviate chronic pain, which is a condition that affects over 25 million people in the United States, according to current estimates.

In fact, a recent that the National Institutes of Health (NIH) funded showed that mindfulness meditation can relieve chronic pain even more effectively than standard treatments.

However, what brain mechanisms are responsible for this analgesic effect? Researchers led by Fadel Zeidan, Ph.D. — who is an assistant professor of neurobiology and anatomy at the Wake Forest Baptist Medical Center in Winston-Salem, NC — set out to investigate.

“Mindfulness is related to being aware of the present moment without too much emotional reaction or judgment,” explains Zeidan.

“We now know that some people are more mindful than others, and those people seemingly feel less pain,” he adds.

So, the team wanted to see whether people’s individual innate predisposition to mindfulness correlates with less sensitivity to pain, and, if so, what brain mechanisms are at play.

Their findings were published in the journal PAIN.

Studying pain, mindfulness, and the brain

To do so, Zeidan and colleagues recruited 76 study participants whose baseline mindfulness levels were assessed using the standard Freiburg Mindfulness Inventory. The participants were healthy and had never meditated before.

Then, the researchers administered painful heat stimulation and non-painful stimulation to the participants, using functional MRI to study their brain activity. 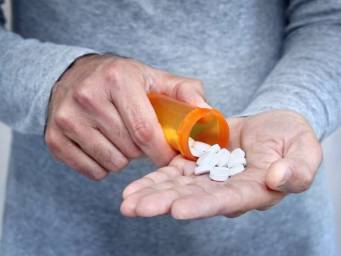 This compound was found safe and effective in mice.

Zeidan and team started from the hypothesis that “trait mindfulness,” or a person’s predisposition to being mindful, would correlate with lower pain sensitivity and higher deactivation of a brain circuit called the default mode network.

The default mode network comprises several brain areas that are interconnected and active in the resting state — that is, when a person does not pay attention to the outside, attention-stimulating world, instead focusing on their internal states.

Some key brain areas that make up this network include the posterior cingulate cortex, the medial prefrontal cortex, and the angular gyrus. Previous research has shown that meditation reduces activity in this network.

Conversely, in those who said they had felt more pain, this brain region was more active. “Default mode deactivates whenever you are performing any kind of task, such as reading or writing,” explains Zeidan.

“Default mode network is reactivated whenever the individual stops performing a task and reverts to self-related thoughts, feelings, and emotions,” he continues.

“The results from our study,” Zeidan says, “showed that mindful individuals are seemingly less caught up in the experience of pain, which was associated with lower pain reports.”

“Now,” he adds, “we have some new ammunition to target this brain region in the development of effective pain therapies.”

“Importantly, this work shows that we should consider one’s level of mindfulness when calculating why and how one feels less or more pain.”

Zeidan hopes that the findings will help bring relief to those living with chronic pain. “Based on our earlier research,” he says, “we know we can increase mindfulness through relatively short periods of mindfulness meditation training, so this may prove to be an effective way to provide pain relief for the millions of people suffering from chronic pain.”

Brief Acceptance and Commitment Therapy for Fibromyalgia: Feasibility and Effectiveness of a Replicated Single-Case Design

ACT Effectively: Introduction to Acceptance and Commitment Therapy | The Place: The Jerusalem Centre For Emotional Wellbeing